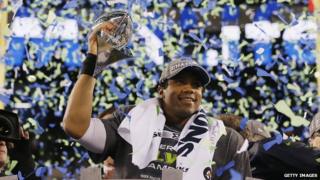 The Seattle Seahawks have won this year's Super Bowl, thrashing the Denver Broncos 43-8.

The American football competition is one of the world's biggest sporting events and around one billion people watched the game.

But the win for the Seahawks wasn't good news for a predicting panda from Memphis Zoo.

The panda got the outcome of the game wrong - guessing that Denver would take the title instead.

This year's Super Bowl was the first to be staged outdoors in a cold-weather state - New Jersey.

Despite worries that it would be too chilly for fans, the temperature was around 7C for the 82,500 strong crowd watching.