Great Britain are into the Davis Cup quarter-finals after Andy Murray secured the winning point against the USA.

The Davis Cup is the top international team event in men's tennis and the GB team will now head to Italy in April for the quarter final. 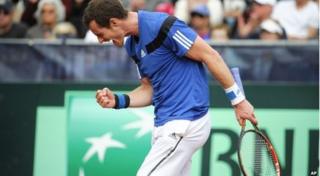 Pleased with the win, Andy said: "This is the first time I've been involved in Davis Cup that we've had a chance of winning the competition."