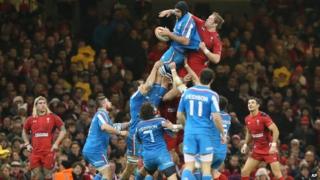 Rugby Union's Six Nation tournament kicked off with a bang - good news for Wales but not-so-good for England.

Wales didn't play brilliantly, but it was a good start for them; they beat Italy by 23 - 15 in the opening match of the tournament.

For Wales fans it's a glimmer of hope for the bid to win a historic third Six Nations championship.

Sad news for England rugby fans though, as their dreams were squashed by France.

It was all looking so good but then a late try by the French finished things off for England... The final score 26 - 24 in Paris.

Is England and Sale Sharks star Mark Cueto predicting it right? Check out this video.