Michael Gove tells teachers to get tough on bad behaviour 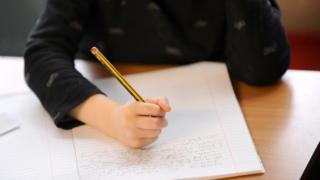 He said possible punishments include weeding the school grounds or tidying classrooms.

He's made the announcement because he says schools need to do more to tackle bad behaviour.

According to government guidelines 700,000 pupils are in schools where behaviour is "not good enough".

Teachers will be getting an instruction pack on how to deal with bad behaviour from next week.

Unions that represent teachers say schools should be able to decide for themselves how best to deal with their pupils.

Is there too much bad behaviour in your school? What punishments should naughty pupils get? Do you think it's fair to do lines or chores if you've misbehaved? Get in touch using the form below.

I think getting a detention is bad enough let alone weeding or tidying classrooms, if you behave badly you shouldn't have to do work as that would make you more angry! A detention is fine and then you have time to think about what you have done!

I think that teachers should get tougher as some of the worst kids in our school blame their behaviour on other students. But I think you shouldn´t make them weed the school grounds or write lines if they don´t deserve it.

I don't think teachers at my school need to get tougher.

At my school, bad behaviour is not really an issue, but the punishments are a reprimand (10-minute detention) or a full, one hour detention if it is more serious.

I think it's ok to have a punishment but doing chores and writing lines is a little bit too far.

At my school, when people are naughty they have to miss 5 minutes of break and stand against the wall. But if they are even more naughty they have to have 10 minutes and so on. But I do not think that writing lines would be fair because they could move to a different school and the school would close down if too many people leave.

I'm not sure, I don't think you should because it might not help. If it does not help it will have to get worse and worse! Until you start whipping them on the back like the olden days!!

I think doing detentions and writing lines is fine, my school even has isolation. I think all the other ideas are really bad.

No, because I might be afraid or annoyed to answer questions if they keep shouting to the class. They should be not to strict and speak in a calm voice and interact with the class.

Our school does not have a lot of bad behaviour. However, if we do misbehave badly, our punishments vary depending on your mistake. I think it is fair to do lines or chores but only if your it is suitable to your mistake.