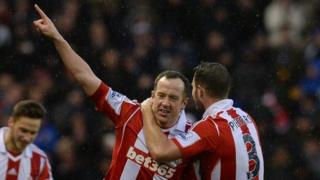 It finished up 2-1 at the Britannia Stadium with Stoke's Charlie Adam (pictured) scoring both goals.

United's Robin Van Persie equalised for the reds but Adam came back again.