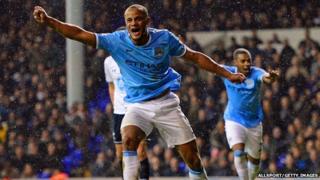 Manchester City have moved to the top of the Premier League table after thrashing Tottenham 5-1.

Yaya Touré, Edin Dzeko, Stevan Jovetic and captain Vincent Kompany all scored for City in the second half.

City are now one point ahead of Arsenal in the title race.

In Wednesday's other results, Chelsea drew 0-0 with West Ham to stay third in the table.