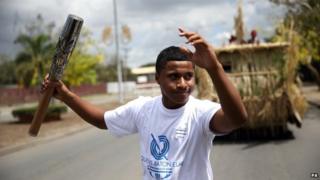 The route of the England leg of the Queen's Baton Relay leading up to the Glasgow Commonwealth Games has been revealed.

It will start in Manchester on 31 May, then pass through a number of cities before ending in Northumberland.

The baton is currently in Africa and England is the last country it will pass through before arriving in Scotland ahead of the Games, which start on 23 July.

Double Olympic champion Dame Kelly Holmes said: "The Manchester 2002 Games brought the country together and winning gold in front of them was amazing. I'm urging the English public to back the team this summer.

The route through England

"The relay is a great chance to get behind Team England and an opportunity to have a go at some of the sports that will be available to try at the Glasgow 2014 Queen's Baton Relay events."

The relay was launched by the Queen, in her role as head of the Commonwealth, at Buckingham Palace last year.

Her Majesty placed a message inside the baton before it set off on its journey.

The public will be able to take part in activities based on the sports included in the games.

At each event, there will be a small number of baton bearers, chosen for their contribution to sport in the local community.

Guide: What are the Commonwealth Games and who takes part? 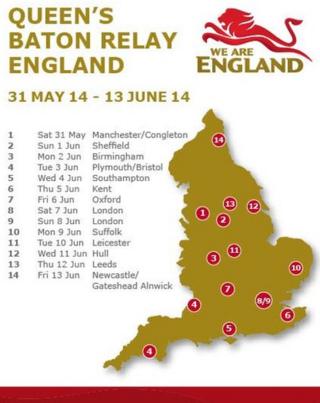