Protests in Ukraine calling for President to resign too 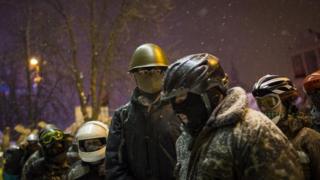 Protestors are still out in force in Kiev in Ukraine after the Prime Minister resigned; they're now calling for the President to step down too.

Prime Minister Mykola Azarov and his cabinet offered to resign amid clashes over anti-protest laws.

It was brought in two weeks ago to try and stop anti-government demonstrations but it has now been removed.

The campaigners want President Yanukovych to resign too.

"Having Prime Minister Azarov resign means that we have achieved something," said Myrolav, a protester from Kiev, "Yanukovych needs to do the same thing now, as we are not leaving until victory."

The president and parliament say they want to resolve the situation and bring the protests to an end but can't do that unless protestors agree to leave the streets and buildings they're occupying.

The protests began after President Viktor Yanukovych turned toward Russia for a bailout loan instead of signing a deal with the European Union.

The campaigns have grown and are now about fighting for more human rights, less corruption and more democracy.