Cameras attached to outside of space station after spacewalk

Two Earth-observation cameras have been successfully installed on the outside of the International Space Station (ISS).

The cameras will be used to stream video of our planet on the web.

Russian astronauts completed the attachment in an amazing six-hour spacewalk on Monday.

Astronauts had aborted an attempt to install the cameras last December due to difficulties. 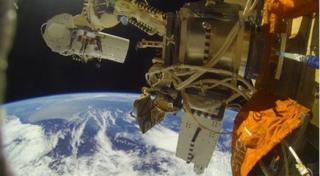 The Canadian company Urthecast, who will stream the footage, confirmed that both cameras were passing data to the ground following this installation attempt.

The resolution of the cameras is so high, large crowds and moving vehicles on Earth will be visible.

The US space agency NASA will be launching another two cameras to the station later this year.

One will study ocean winds and storms; the other will examine small particles in the atmosphere that can influence the climate.