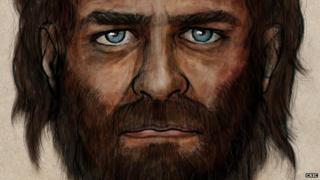 Ancient European cavemen may have had blue eyes and been intolerant to milk, according to a new scientific study.

A team of researchers in Barcelona made the claims after extracting DNA from the tooth of a 7,000-year-old skeleton they found frozen in a cave. 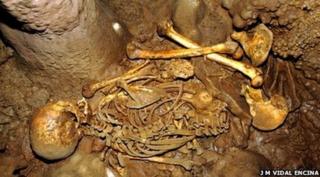 j m vidal encina
The bones of the 7,000-year-old man were discovered in a cave in Spain

The study also suggests strong links between European and Africa cavemen. Scientists at the Institute of Evolutionary Biology in Barcelona say the caveman they analysed had a mix of European and African traits, with dark skin and blue eyes.

Professor Carles Lalueza-Fox, who led the study, said: "The biggest surprise was to discover that this individual possessed African versions in the gene that determine the light pigmentation of current Europeans. He possessed the genetic variations that produce blue eyes in current Europeans."

The study also suggested this particular caveman was lactose intolerant, meaning he'd struggle to drink milk because he was bad at digesting starch.