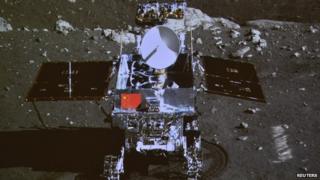 Reuters
The rover Jade Rabbit, also known as Yutu, has been exploring the Moon's soil

The rover landed in December as part of China's Chang'e-3 mission - the first "soft" landing on the Moon since 1976.

It was expected to operate for around three months.

Earlier this month, the Beijing Aerospace Control Centre said that Jade Rabbit, also known as Yutu, had successfully explored the surface of the Moon with its mechanical arm.

But it's believed a malfunction occurred on Saturday. It was just before the rover was due to become dormant for 14 days during the lunar night, when there would be no sunlight to power the rover's solar panel.

Space expert, Dr Katherine Joy from the University of Manchester told Newsround how difficult it is to fix things in space.