Manchester City to face Chelsea in FA Cup fifth round 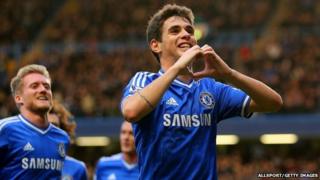 Manchester City have been drawn to face Chelsea at home in the fifth round of the FA Cup.

The Blues beat Stoke City 1-0 on Sunday to go through, thanks to a goal from Oscar.

Chelsea boss Jose Mourinho welcomed the tough away draw: "Our priority for the season is to improve. And the best way to improve is difficult things. It is a good thing for us; it's a good draw."

Everton boss Roberto Martinez will face one of his former clubs, Swansea, and Sunderland will host Southampton.

The games will be played on the weekend of 15-16 February.