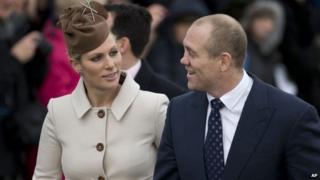 Mia Grace is the Queen's fourth great-grandchild and 16th in line to the throne. She was born six days ago at the Gloucestershire Royal Hospital.

Zara won silver with the Team GB equestrian team at the London Olympics 2012.