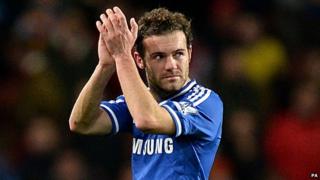 It looks like Juan Mata is swapping the Blues for the Red Devils - an offer for him from Manchester United has been accepted by Chelsea.

It's believed that United has agreed to pay £37 million for the midfielder.

Mata will have a medical exam on Thursday before completing the move. It's thought he'll sign a four and a half year deal with United.

The Spanish international said goodbye to teammates and staff at Chelsea's training ground on Wednesday.

Man United were knocked out of the League Cup on Wednesday night by Sunderland on penalties.