The Wanted announce break to fans 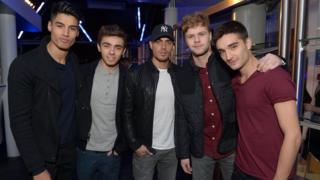 The Wanted have announced they're taking a break after their upcoming tour.

In a statement on their website the boys said they want to 'take time to pursue personal endeavours'.

The group also thanked their fans for 'their continued love and support'.

Tom, Max, Nathan, Jay and Siva had their first number one with 'All Time Low' and released their debut album in 2010.

Their 'Word of Mouth Tour' kicks off in Liverpool in March.