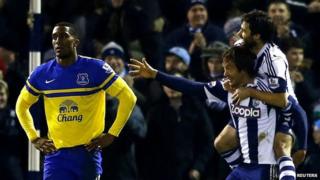 Kevin Mirallas put Everton on course for the victory that would have moved them into the Champions League places.

But Roberto Martinez's side were punished for a poor second-half display.

Diego Lugano's fine header 15 minutes before the final whistle took it to 1-1.

It was Pepe Mel's first game as the new West Brom head coach.