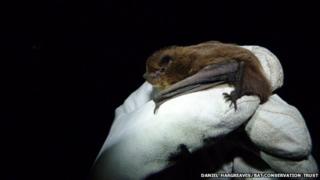 The first bat to cross the sea from the UK to Europe has been recorded.

A tiny Nathusius' pipistrelle that was ringed in England was discovered nearly 370 miles (600km) away in the Netherlands.

Ringing is used by wildlife experts to keep track of the bird and mammal population and to help them understand more about migration habits.

It's done by placing a numbered piece of metal or plastic around the creature's foot.

Until now the migration habits of these small bats was a mystery, because they are too small to carry the kinds of tracking tags fitted to birds and other larger species. 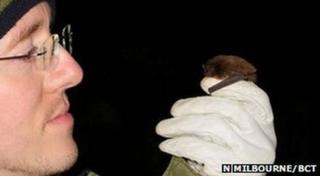 N Milbourne/BCT
A Nathusius pipistrelle being ringed in the UK

The small bat was found on a cauliflower and broccoli farm in the Netherlands.

Unfortunately it had died but its identification ring could help solve the migration mystery.

The bat's ring was traced to the Bat Conservation Trust in England and was fitted in 2012.

Pipistrelles have been spotted on oil platforms and boats in the North Sea but this is the first time that a bat ringed in England has been found in Europe.

The bat found in the Netherlands could be the first evidence to show that the bats migrate across the North Sea.

Daniel Hargreaves from the Bat Conservation Trust says: "It's incredible to think that this little bat has flown a distance of at least 600km, avoiding hazards like roads and wind turbines."

"For it to safely cross the sea is remarkable," he said.