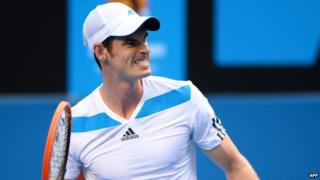 Andy Murray is through to the quarter-finals at the Australian Open after beating Stephane Robert.

BBC reporter Russell Fuller said: "The first four rounds have shown what a fabulous physical recovery Murray has made from surgery."

The Wimbledon champion has made it to the final of the Australian Open three times - but has never won.