Fears for UK wildlife after floods

Animal charities say they're worried about the effect of the recent floods on wildlife in the UK.

The RSPCA say they've rescued almost 200 animals since the start of the wet weather in December.

Several Wildlife Trusts across the country say they too are rescuing creatures because of the conditions.

The charities are now urging people to keep an eye out for animals or birds that might need help.

One of the biggest projects for the RSPCA has been the rescue of seals and otters, as well as animals like horses who became trapped in waterlogged fields.

The charity had to transfer some of its seals across the country because their sanctuary in Norfolk is too full with 100 young pups re-homed there; many of those are still less than three weeks old.

Lee Stewart from the RSPCA said: "The flooding resulted in one of the biggest seal rescue projects the RSPCA has ever seen and everyone is working round the clock to help these little fellas.

"If it wasn't for the work of the RSPCA then who knows what would have happened to these poor pups."

The Wildlife Trust says at least 12 seal pups were rescued and taken to Mablethorpe Seal Sanctuary and at Natureland in Skegness there's also been a rise in the number of abandoned pups taken in.

Shropshire Wildlife Trust is rescuing hedgehogs, after their feeding grounds were washed away by floodwater. 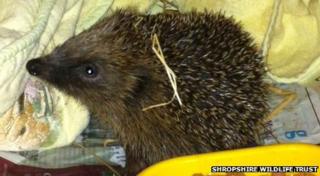 Shropshire Wildlife Trust
Animal rescue teams are taking in hedgehogs, feeding them up, then releasing them in safer places.

Dorset Wildlife Trust's Marine Awareness Officer, Julie Hatcher said: "The weather conditions will make it hard for birds that live and feed around the coast, and there's a risk they could become weak from not being able to feed properly.

"The biggest concern is that seabirds will become dehydrated, as their intake of water comes from the food they eat.

"We are encouraging members of the public who come across an injured bird to phone the RSPCA for assistance."

The Wildlife Trusts says flooding when it is extreme is dangerous for many animals, but can sometimes be helpful to some creatures.

This is because flood water helps some animals that are used to wet habitats spread out and move to new areas. 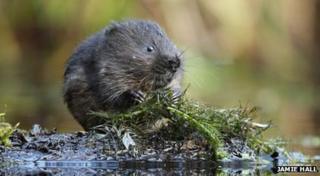 Jamie Hall
Water voles love wet habitats: they live along rivers, streams and ditches, around ponds and lakes and in marshes.

The charity said this happened with water voles after flooding in 2012; the water voles moved to new areas and found more sources of food.

Many animal rescue charities are now busy helping to restore rescued creatures to full health, and others are holding clean-up days where volunteers can help restore nature reserves that have been badly affected by the weather.