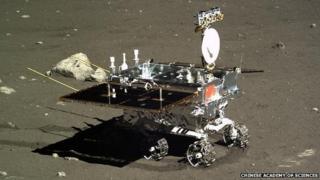 The survey lasted half an hour and official news service Xinhua said the rover performed well in the tests.

In December, the Chinese landing module and rover made the first "soft" landing on the Moon since 1976.

The landing module and the rover will both gather information, the lander will operate for a year and the rover for three months.

The rover is partly powered by energy from the Sun.

It only began to work after it had warmed up after hibernating during the lunar night, which lasts two Earth weeks.

Temperatures on the Moon can drop at low as -180C (-292F) so the equipment has to be protected by heating units.