Monkeys banned from eating bananas because they're unhealthy 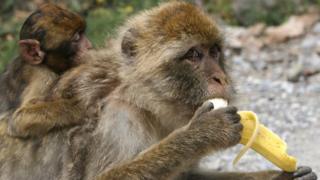 Ask anyone what a monkey eats and they'll say bananas, right?

Well, not at Paignton Zoo in Devon because the monkeys have been banned from eating them.

Animal nutritionists at the zoo say giving bananas to the primates is like humans eating too much cake and chocolate.

The monkey troop at the zoo have been on a health kick and have been avoiding food that is too sweet and sugary - including bananas.

Dr Amy Plowman, who works at the zoo, said it's because specially grown fruit is different to fruit that grows in the wild; it is much sweeter and doesn't have as much protein and fibre that keep them healthy.

She said: "People usually try to improve their diet by eating more fruit - but fruit that's cultivated (grown) for humnans is much higher in sugar and much lower in protein and fibre than most wild fruit because we like our fruit to be so sweet and juicy.

"Giving this fruit to animals is equivalent to giving them cake and chocolate.

"Compared to the food they would eat in the wild, bananas are much more energy-dense - they have lots of calories - and contain much more sugar that's bad for their teeth and can lead to diabetes and similar conditions."

Dr Plowman said it had not been too hard to wean the monkeys off bananas and give them vegetables instead.

"The alternative is vegetables and lots of them, especially leafy green veg. We still use starchy root veg" she said.

"They didn't get a choice but - unlike children - they couldn't complain."

A typical monkey diet now features lots of green leafy vegetables, smaller amounts of other vegetables and as much browse - leafy branches - as possible, especially for the leaf-eating monkeys.