Frozen, Despicable Me 2 and Gravity up for Oscars

The 86th Academy Awards nominations have been announced and there's hot competition from some top kids' movies.

Fresh from its success at the Golden Globes, Frozen is up for best film in the animated feature category.

The Disney movie tells the story of Princess Elsa, who accidently traps her kingdom in an everlasting winter with her icy powers.

It joins Despicable Me 2 and the prehistoric comedy The Croods in the same category. 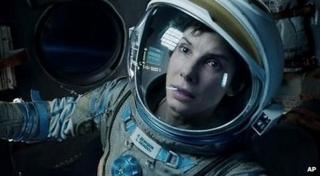 AP
Sandra Bullock has been nominated for best actress

Its star Sandra Bullock, is up for best actress for her performance along side Alfonso Cuarón for best director.

But Sandra Bullock's got tough competition: British actress Judi Dench who starred in Skyfall and Pirates of the Caribbean: On Stranger Tides, is nominated for her role in Philomena.

The BBC animation Room on the Broom, based on the book by Julia Donaldson is up for best animated short.

Current UK number one, Happy by Pharrell Williams, from Despicable Me 2 and Frozen's Let It Go have both been nominated for best original song.

The winners will be announced at the glitzy ceremony hosted by Ellen DeGeneres in Hollywood on Sunday 2 March.