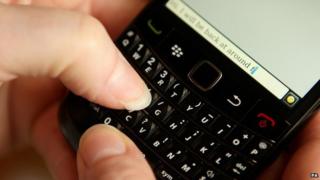 More than twice the number of messages will be sent using instant messaging (IM) apps as regular text messages in 2014, predicts a tech report.

Deloitte brings out the report each year saying what they think will change in technology over the next 12 months.

The report says IM apps sent more messages than regular texts in 2013, and they think in the next year IM apps will send loads more messages.

It estimates 160 billion messages were sent worldwide via IM in 2013.

That's nearly three times as many as the previous year, and is more than the estimated 145 billion regular texts (SMS).

I mostly use Skype because it allows you to video chat and message all for free.

I tend to use Snapchat because you can send photos, video and text,

I message my friends and family using Viber, WhatsApp, Snapchat and Instagram. It's way cheaper than paying for texts!

I use iMessage, Instagram, Snapchat, Skype and sometimes I use texting, but not many of my friends have phones.

I use Snapchat as it is much easier and quicker to speak to my friends. I sometimes use Facebook and BBM.

I mainly message my friends through iMessage, Snapchat and Facebook. I very rarely text them anymore because its free to message them this way.

I Snapchat my friends or Facebook them. Who needs texts anymore? Use the things that are free!

I use KIK to talk to my friends as you don't have to pay like I do on my phone.

I downloaded BBM onto my iPhone about a month ago and I love it. I BBM all my friends and so I don't really text any more.

I use BBM on my iPhone because all you need is internet to contact my friends.

Well I sometimes ring Mum and Dad and my friends.

I used to use my phone to text my friends but after I got my iPad Mini I use Facebook and instant messaging apps.

I text my friends. I have tried using WhatsApp but I don't like it.

I text a couple of my friends and my parents but I use BBM and WhatsApp way more because they're free and literally everyone has one or the other of them!

I normally write texts but sometimes I write on Skype or message.

I prefer to iMessage on iPod because it's free.

I use iMessage that you get automatically on an Apple device. I used to use Snapchat and Tango, but not anymore.

I text my friends and we also use Snapchat to talk to each other. I don't send IMs.

I always message my friends by text no matter what. I don't use instant messaging at all.

I prefer WhatsApp because you can send messages very quickly.

I like to chat to my cousin using WhatsApp because it doesn't affect the signal.

I send basic texts to my parents and I have never sent an IM message.