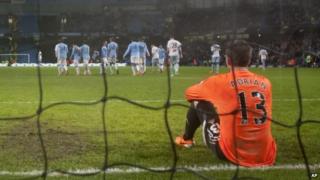 West Ham have suffered their second hammering four days, after losing 6-0 to Manchester City in the League Cup.

On Sunday West Ham were beaten 5-0 by Nottingham Forest in the FA Cup.

Some fans are now calling for West Ham manager Sam Allardyce to be sacked.

He said: "It's life when you're not doing well you get stick as a manager."