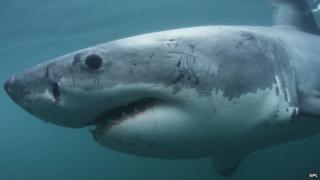 Great white sharks may live into their 70s - more than three times longer than scientists used to think.

Researchers have used a new way to work out their age by studying shark bones.

They took eight sharks and checked their bones for radioactive carbon particles from nuclear tests done in the 1950s and 1960s.

The particles got into the ocean and were absorbed by animals who were alive at the time.

Knowing things like how fast sharks grow and how long they live can be used to help protect the animals.