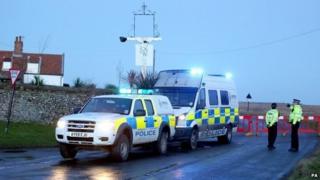 A US Air Force helicopter has crashed in Norfolk during a training exercise, killing four people.

The HH-60G Pave Hawk, based at RAF Lakenheath in Suffolk, came down in a nature reserve in Cley next the Sea on Tuesday night.

Emergency services are still at the crash site, and people are being told to keep away.

An investigation's started into what caused the aircraft, which was carrying weapons, to crash.