Theo Walcott to miss World Cup and rest of season 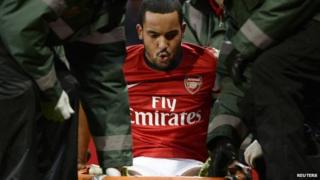 Theo Walcott will miss the World Cup and the rest of the football season, after being ruled out for at least six months with a knee injury.

The Arsenal forward was injured on Saturday during the Gunners 2-0 FA Cup victory over Tottenham.

A statement from the club said: "Theo has sustained a ruptured anterior cruciate ligament of his left knee.

He will have surgery in the near future and is expected to be out for at least six months."

Walcott has never played at a World Cup finals, despite being picked for the squad in 2006 when he was just 16.

In 2010, he was left out of the squad for the South Africa World Cup.