Star Wars style holograms could be used to send messages to friends and family in the near future, according to a company working on the hi-tech idea.

A Polish firm say they've developed the Leia Display System (LDS), which works by projecting hi-resolution images on to a 'fog' of water vapour.

The images appear to float in mid-air and developers say in the future the system could be used for interactive phone calls with people appearing in a room in 3D.

Inspired by the film 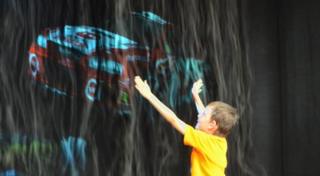 The Leia Display system was inspired by the character in the original 1977 Star Wars film Princess Leia, who appears as a hologram in a recorded message.

Some newspaper reports had suggested the technology could be available within the next five years but one of the men behind it was reluctant to put a timescale on it.

Marcin Panek, who's the lead developer of LDS said: "Although the technology is still quite large and expensive it is hoped that one day the system could be small and cheap enough to mass produce for people to use at home."