Parts of America are preparing for potentially record-breaking low temperatures, caused by an icy blast of air known as a polar vortex.

A winter storm has already covered north-eastern states and parts of Canada with snow up to 60cm deep.

Weather experts think the icy temperatures could be as low as -60 degrees Celsius.

Schools in Chicago have closed and people have been told to stay indoors.

Meanwhile, a plane from Toronto slid into snow as it turned onto a taxiway after landing at New York's JFK airport on Sunday. 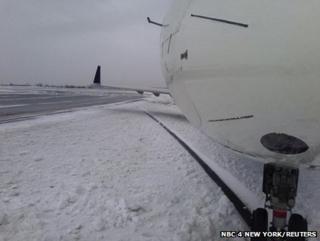 The plane skidded off the runway

No-one was hurt in the incident but all flights at the airport were suspended for two hours because of icy runways.

The plunging temperatures result from the polar vortex, an anti-clockwise pool of cold, dense air.

The vortex has been very strong, with the cold air locked in to Arctic Canada for a long time. Stuck in one place, the air has got colder and colder. Cold air is dense so once it is released it travels a long way and that is why it is reaching so far south.