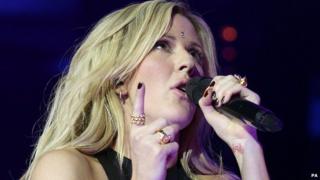 Ellie Goulding's album Halcyon has topped the album chart more than a year after it was released.

The album first went on sale in October 2012 but it has only just hit the top spot.

Five songs from the album have been in the top 40 including Ellie's number one hit Burn.

Ellie's Children in Need song How Long Will I Love You is at number five in the singles chart.