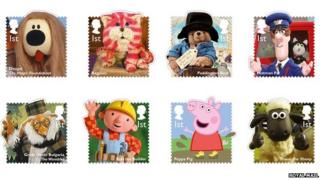 Some of the favourite characters from children's TV shows will appear on a new set of stamps.

Characters from 12 shows going back as far as 1950s favourite Andy Pandy, to the more modern character of Peppa Pig, will be made into stamps.

The Classic Children's TV stamps are being made by Royal Mail to celebrate 60 years of children's television and will be released on 7 January.

Dougal - from The Magic Roundabout

Great Uncle Bulgaria - from The Wombles