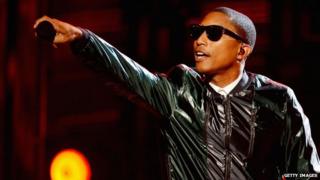 Pharrell Williams had three number ones in 2013

The American star features on Blurred Lines by Robin Thicke, as well as Daft Punk's Get Lucky.

Blurred Lines was the UK's most popular single of 2013, selling more than 1.47 million copies and spending five weeks at number one.

Pharrell also grabbed a third chart-topper with Happy in 2013, which is currently sitting at number one.

8. Just Give Me A Reason - Pink featuring Nate Ruess