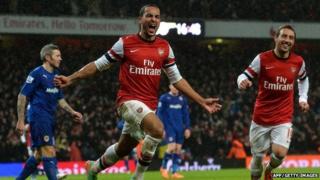 Arsenal stay top of the Premier League after a late 2-0 win over Cardiff - with both goals scored in the last three minutes!

Nicklas Bendtner fired in the first one from close range, then Theo Walcott converted a Jack Wilshere pass.

The former Manchester United player, currently boss at Molde, is set to take over at the Welsh club.

Chelsea's 3-0 victory over Southampton means they're in third spot - only one point behind Manchester City!