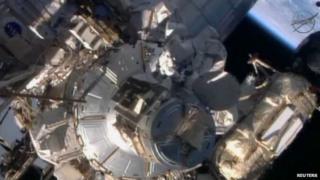 Astronauts at the International Space Station have completed the first of a series of spacewalks to carry out urgent repairs.

The two American astronauts, Rick Mastracchio and Mike Hopkins, were outside the station for nearly six hours.

They had to remove a pump - the size of a refrigerator - which had become faulty.

On their second spacewalk, planned for Tuesday, they will install a new one.

The pump is part of the station's cooling system - half of which automatically shut down last week after detecting abnormal temperatures.

Nasa said that a scheduled third spacewalk may not be necessary now, because of the success of Saturday's spacewalk.