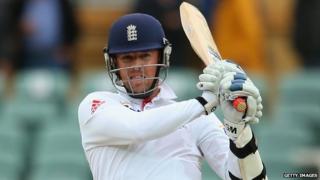 The England and Nottinghamshire cricketer, Graeme Swann, has announced his immediate retirement from the game.

He said: "This decision has been very difficult seeing as the England team has been my family for seven years now, but I feel it is the right time."

Graeme has taken only seven wickets during the current Ashes series taking place in Australia.

Though England have already lost, there are still two Test matches to play in the five-part series.

However he has ruled himself out of the rest of the Ashes tour.

Graeme took 255 international wickets during 60 Tests in his career - that's the sixth highest tally for England.

Despite struggling with elbow problems in recent years, he's played in three Ashes series victories and helped England become the number one ranked side in the world in 2011.