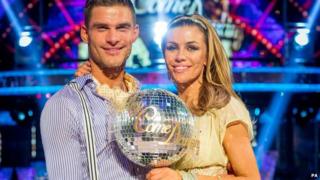 Earlier in the night singer Sophie Ellis-Bextor was voted off during the first part of the final.

Abbey couldn't believe she'd won and she said that Strictly had been "the most perfect experience I've had".

It was the first time Strictly had had an all female final and more than six million votes were cast to choose the winner.