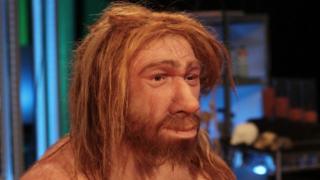 An analysis of a Neanderthal's fossilised hyoid bone - a horseshoe-shaped structure in the neck - suggests the species had the ability to speak.

This has been suspected since the 1989 discovery of a Neanderthal hyoid that looks just like a modern human's.

But now computer modelling of how it works has shown this bone was also used in a very similar way.

Scientists say its study is "highly suggestive" of complex speech in Neanderthals.

This model allowed the group to see how the hyoid behaved in relation to the other surrounding bones.

"Many would argue that our capacity for speech and language is among the most fundamental of characteristics that make us human. If Neanderthals also had language then they were truly human, too."