Who will win the Strictly Come Dancing final?

For the first time ever four women will battle it out in the Strictly Come Dancing final, but which one will come out on top?

Abbey Clancy, Sophie Ellis-Bextor, Natalie Gumede and Susanna Reid will go head to head in one of the closest fought finales in years.

So here's Newsround's guide on everything you need to know about the final.

Each dancer will perform two routines alongside their professional partner. One will be chosen by the judges and the other is a showdance.

One couple will be voted out of the competition and the final three will go on to dance their favourite routine from the series. The judges will comment on the performances but, unlike the rest of the shows, it will be entirely down to the viewers to decide who wins.

So what can you expect from each of the couples in the final? 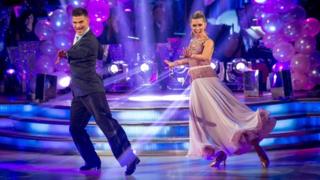 Model Abbey Clancy says she never expected to get so far in the competition. "I'm completely surprised. I've never danced before and I didn't have any expectations which makes getting to the final even more special."

Abbey, who is married to Stoke City footballer Peter Crouch, said she was glad that the public had had the chance to see another side of her beyond modelling.

"People are used to seeing pictures of me. I haven't got a strong TV career so this has been good for that. People haven't been that negative towards me.

Judges' Choice: The Waltz to Kissing You by Des'ree

Showdance: Sweet Child of Mine by Guns N Roses

Couples' Favourite: The Quickstep to Walking On Sunshine by Katrina and the Waves 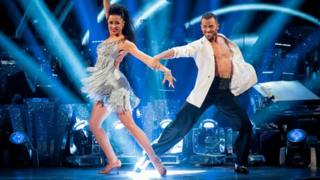 Natalie Gumede is a former Coronation Street actress and says she and partner Artem Chigvintsev did not have their confidence dented by having to fight for their strictly lives in the semi-final dance off.

Natalie was one of the most experienced dancers at the start of the competition but says she has no plans to explore a career as a dancer after the show finishes. She said: "For me this was about falling in love with dancing and self-expression. It was never about getting in a West End musical."

Showdance: Steppin' Out with My Baby by Christina Aguilera and Tony Bennett 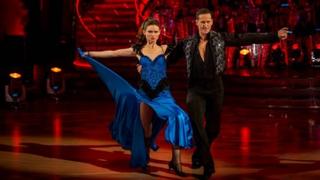 Singer Sophie Ellis-Bextor admits she is relieved that she and partner Brendan Cole have not faced a dance off throughout the series.

"I honestly don't know how I would have coped with it," she said.

The pop star, who was big in the 90s and noughties, said being part of the show had brought back all kinds of memories. She said: "I spoke to my grandpa yesterday who's in his 80s and he said my great granny used to do the Charleston on stage!"

Showdance: I Wanna Dance with Somebody by Whitney Houston

Couples' Favourite: The Charleston to Rock It For Me by Caravan Palace 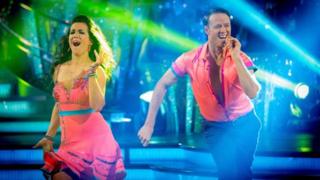 BBC Breakfast presenter Susanna Reid is favourite to win the title and says she is "excited and a bit overwhelmed" that she has made it to the final with partner Kevin Clifton.

"I can't believe we've managed to get right to the end."

Like Natalie Susanna says she has no plans to pursue a new career after Strictly was over.

"My role is on BBC Breakfast. I love that job and, apart from doing Strictly, I've got nothing else in my mind at the moment. I'm straight back to work after Christmas."

Showdance: Your Song by Ewan MacGregor