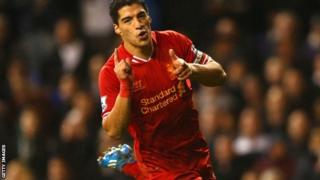 Luis Suarez has signed a new four-and-a-half-year contract with Liverpool.

The Uruguayan striker tried to force a £40m move to Arsenal in the summer but has scored 17 goals in 11 games this season.

Liverpool are currently second in the Premier League and Suarez says he believes he can win trophies with the reds.

He said: "I am delighted to have agreed a new deal with Liverpool and have my future secured for the long term.

"I believe I can achieve the ambitions of winning trophies and playing at the very highest level with Liverpool.

"My aim is to help get us there as quickly as possible."

Liverpool manager Brendan Rodgers said: "This is fantastic news for everyone associated with the club.

"Luis is a world-class talent and securing his services is crucial for what we are trying to achieve here."