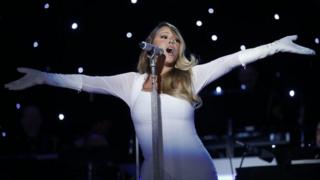 Mariah Carey's All I Want For Christmas has hit the 1 million sales in the UK, 19 years after it was first released.

According to the Official Charts Company the track crossed the milestone after selling 68,000 copies in 2013.

The American singer said: "Thank you to all of my British fans! Love, Mariah."

The track reached number two when it was first released in 1994 but was kept off the top spot by East 17's Stay Another Day.

It has since re-entered the chart on a further eight occasions and since 2007 it has appeared in the top 40 every December.