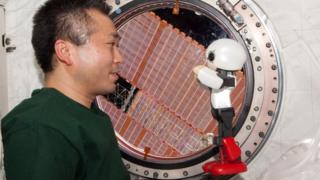 Kirobo - the first humanoid robot to be sent into space is doing a good job of keeping the astronauts entertained.

Kirobo was sent up first but had to wait for Japanese astronaut Koichi Wakata to arrive, before he could practise his conversation skills.

Kirobo is programmed to process what is being said and he can even build sentences to talk back.

He says he's enjoying the experience of zero-gravity and that he wants to ask Santa for a toy rocket this Christmas! 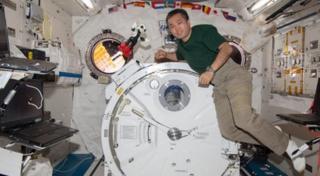 Kirobo and Wakata just hanging around!

Wakata says he's glad to meet Kirobo, and when he asked him how it feels being in a zero-gravity environment, Kirobo said: "I'm used to it now, no problem at all."

The creator of the robot, Tomotaka Takahashi, said nobody knew how well Kirobo would be able to answer Wakata's questions.

Though Kirobo had some awkward pauses and Wakata spoke more slowly than usual at times in their chat, Takahashi said conversations smoothed out over time.

Kirobo took off from Japan's Tanegashima Space Center for the International Space Station this summer aboard a space cargo transporter. Wakata arrived in November.