An investigation has started to find out why part of a theatre collapsed last night, hurting dozens of people.

A section of the roof at London's Apollo theatre in the West End fell down during the show.

The theatre had been almost full with 720 people watching the performance. 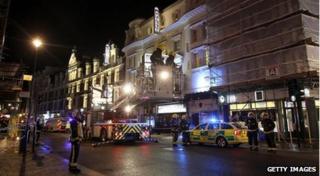 Fire crews were on the scene within minutes of the incident

London's emergency crews are being praised for their quick work, with many people saying they were on scene 'in minutes'.

The Apollo is a Grade II listed building, which was was built in 1901 and has 775 seats over four levels.