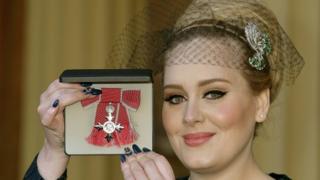 Singer Adele has been awarded an MBE for services to music by the Prince of Wales at Buckingham Palace.

She is famous all over the world thanks to her debut album 19 and follow-up 21. Last year she won the best song Oscar for James Bond theme tune Skyfall.

The London-born singer came to public attention when she became the first winner of the Brits Critics' Choice Award in 2008, and since then she's gone on to win six Grammy awards in the US.

She enjoyed the longest run ever by a woman at the top of the UK album charts and she became the first woman to have two singles and two albums in the UK top five at the same time.

What is an MBE?

MBE stands for Member of the Order of the British Empire.

This Honour is part of a group of awards created by King George V during world war one.