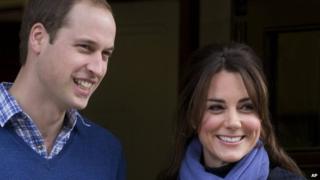 A court has been told for the the first time that Kate Middleton was a victim of the phone-hacking scandal.

Evidence presented at the trial of several journalists from the News of the World newspaper claimed voicemails left for Kate by Prince William were accessed.

The court heard how in one personal message, from before the couple got married, Prince William, who's now known as the Duke of Cambridge, calls Kate by the pet name "babykins".

In another William told Kate he had been working late on an RAF training exercise and 'had almost been shot by blanks'.

The messages were described in court as part of the phone hacking trial, in which former editors and reporters from the News of The World are accused of offences connected with illegally listening to other people's voicemails.

The newspaper has since closed down and the investigation sparked a major inquiry into the way newspapers are run.

Former NoW editors Rebekah Brooks and Andy Coulson are on trial with then royal editor Clive Goodman and four others others accused of a number of offences, which they all deny, including conspiracy to illegally intercept voicemails.

Find out more about Timeline: The phone-hacking scandal by clicking here or the Leveson inquiry into the way the press work here.