Who was Ronnie Biggs and what was the Great Train Robbery?

It's one of the biggest criminal thefts Britain has seen in the past century - the Great Train Robbery of 1963.

On August 8 that year a criminal gang stole millions of pounds from a train carrying post from Glasgow in Scotland to London in England.

One of the the criminals involved, Ronnie Biggs, died aged 84 today.

He became infamous after going on the run from police, all over the world, for more than 30 years.

In the 1960s lots of letters, parcels and money were transported around the country by rail.

One of these mail trains, heading to London from Glasgow, was stopped by a criminal gang in Buckinghamshire in the south east of England.

They escaped with 120 bags of cash, totalling more than £2.5 million - which would be worth a whopping £40 million in today's money.

Who was Ronnie Biggs?

Ronnie Biggs was one of the members of the gang, but he became notorious - famous for the wrong reasons - because of what happened after he was jailed. 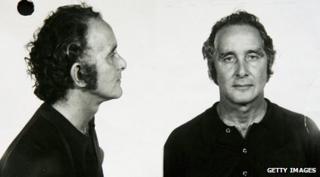 Biggs said he was "quite pleased" to be involved

Biggs was convicted and sentenced to 30 years in prison but in 1965 he escaped from Wandsworth Prison by climbing over the wall.

He fled to France, then Australia, before ending up in Brazil.

In 1974 he was arrested. But then he had a son and under Brazilian law was protected from being sent back to Britain.

In an interview he said: "I don't regret the fact that I was involved in the train robbery. As a matter of fact I am quite pleased with the idea I was involved with it."

When asked why, he answered: "Well it's given me a little place in history. I've made a mark for myself."

Why was he well-known?

Many people including the family of the injured train driver didn't believe Biggs should have been famous or have made money out of his crime.

But he became well-known because of the shocking events of his life story - the robbery, the prison escape and the 36 years on the run.

These things usually only happen in fiction, so many people were fascinated by how he had managed to make them a reality. 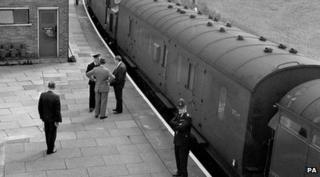 It was one of Britain's biggest crimes of the 20th century

In 2001 - as Biggs' health worsened - he flew back home to the UK to get medical help - and was taken back to prison.

He was released from jail in 2009 after becoming seriously ill.

Trains don't carry large amounts of cash anymore - so a serious crime like the Great Train Robbery is unlikely to ever happen again.