Plastic banknotes to be used from 2016 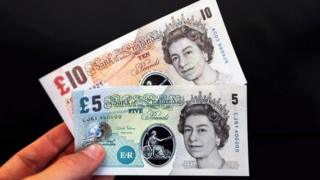 Plastic banknotes are to be brought into circulation by the Bank of England in 2016.

The new notes will be made of polymer, instead of cotton like the current banknotes, because the Bank says they will be much cleaner.

The £10 note is to go plastic about a year later, this one will also have the image of author Jane Austen on it.

More than 20 countries around the world, including Australia, New Zealand and Canada now use polymer banknotes.

How are they made?

Plastic banknotes are produced from a thin, transparent and flexible film made of polypropylene.

This is coated with multiple layers of special ink (usually white) to the front and the back, that allows the design to be printed onto the note.

The Bank has said that these notes last for 2.5 times longer than paper banknotes.

They will survive a spin in the washing machine, but will still melt under extreme heat such as an iron.