What is the Christmas Truce?

World War One affected nearly everyone in Britain, as men and boys were sent to fight in some of the toughest conditions.

One of the most interesting stories to come out of the conflict was the Christmas Truce, when German and British soldiers went into no man's land to shake hands, sing carols and play a football game. 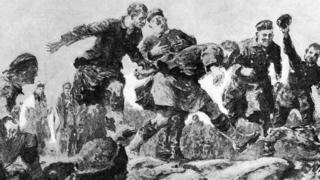 In trench warfare, two sides dug ditches, known as trenches, opposite each other and fought over the land in between.

That land in the middle was called No Man's Land.

For the last two years, the Premier League has been running a Christmas Truce football tournament in Ypres.

This year, youth teams from England, Belgium, Germany and France all took part.

Conrad plays for Manchester City and the trip to the trenches had a big impact on him.

Every night since the war, local people gather to remember those soldiers who died at the Menin Gate memorial in Ypres.

The players attend the Last Post ceremony at the Menin Gate and one of the players says the Ode to Remembrance.