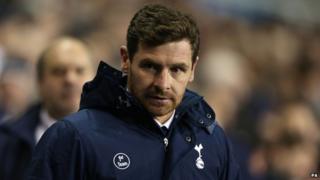 Tottenham Hotspur have sacked manager Andre Villas-Boas after only 17 months in the job.

The announcement comes after a humiliating 0-5 loss at home to Liverpool on Sunday.

The defeat was the club's worst at White Hart Lane in 16 years and left Spurs seventh in the Premier League - eight points behind leaders Arsenal.

Tottenham were also beaten 6-1 by Manchester City in November and have struggled to keep up with the top four.

A statement from Tottenham said: "The club can announce that agreement has been reached with head coach Andre Villas-Boas for the termination of his services".