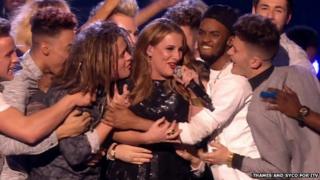 Sam Bailey has been crowned champion of this year's X Factor.

The Mum of two and prison officer pulled in a record one million votes to beat Nicholas McDonald in the final at Wembley.

Her mentor Sharon Osborne was tearful through much of Sunday's show and fell to the ground when Dermot announced she had won.

Sam's first single, called Skyscraper, is now one of the favourites to get the number one single this Christmas.

Sam and Nicholas were left to battle it out in Sunday's final after Luke Friend was voted out on Saturday.

The final included performances from One Direction, Katy Perry and a duet between X Factor judge and singer Gary Barlow and Sir Elton John.

As well as winning a recording contract, Sam will also support Beyonce on the UK leg of her Mrs Carter tour in February.