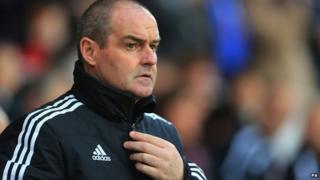 Steve Clarke has been sacked as head coach of West Bromwich Albion after a fourth straight Premier League defeat.

His last game in charge was a 1-0 loss against Cardiff on Saturday, which left the team just two points above the relegation zone.

Albion have won only seven of their 34 Premier League games in 2013.

Joint-assistant head coach Keith Downing will now take over while the club look for a new head coach.

West Brom were eighth last season - their best Premier League finish - but have struggled this term without their striker Romelu Lukaku, who's on loan from Chelsea.

Steve Clarke is the fourth Premier League manager to lose his job this season.